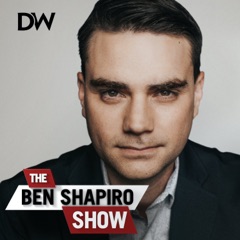 Tired of the lies? Tired of the spin? Are you ready to hear the hard-hitting truth in comprehensive, conservative, principled fashion? The Ben Shapiro Show brings you all the news you need to know in the most fast moving daily program in America. Ben brutally breaks down the culture and never gives an inch! Monday thru Friday.

No talent whatsoever.
Get him outta here
This guy speaks so fast spewing numbers and “fact” to drive his narrative. Makes absolutely no sense unless you are a right wing fanatic.
Ben Shapiro makes many complicated events easy to understand. His show is also not boring, it makes commutes very enjoyable. Finally, his show is accurate, he sticks to the facts.
Ben Shapiro does not blidly defend politicians or political parties. He calls out politicians that he usually agrees with when he finds something that they did bad.
If you are looking for objective news with no these days, you are straight out of luck. Your only option if you do want balanced news is to get it from at least two sources; from the left and right. Ben Shapiro does not hide his bias like many others do (cough cough CNN) and he even recommends that you not only listen to him, but alo people on the left and come to your own conclusion.
I’m not from the USA but all the things he is talking about are relevant here in the Netherlands.
Keep up the good job 🇳🇱
⭐️⭐️⭐️⭐️⭐️
To the point and logical!
This fellow makes no attempt to bridge the divide between truth and hearsay and instead overwhelms with a torrent of laughable radicalrightisms
logical argumentations being used by mister Shapiro. Even his impressions are funny!
Straight talk but with a heavy spin. Still one of the better news sources around.
Even though English is not my native language and Ben is speaking so fast ( with the speed of light), most I do get because he makes sense, logic and has a foundation of morals and principles, common sense which today is not easy to be found. So keep going, hope that many young people will be challenged by your way of thinking and reasoning.
Ben Shapiro makes you think and laugh. He knows so much and talks so fast, you can hardly do anything else at the same time.He's a smart guy, very conservative, but decent to anyone.
Great show, very informal!
Hi all
First, sorry form poor grammar, I’m not a native English speaker, and i don’t life in the US/UK so i don’t write/speak English daily. And im dyslectic as well which doenst help either… I use both Google and Word to make it readable as possible…
Enough with the self-victimizing and on with the review! Before I becomcome a SJW.. ;)
I have been listening to the podcast of Ben Shapiro since July (2016) because I just wanted to know what was going on in the US elections. After watching college briefings Ben Shapiro and other conservative college speakers. I found out that Ben had his own Podcast, and since I liked him on the college tours and in the debates, I decided to listen to the podcast.
For me the Ben Shapiro show is worth listening because I find Ben a trustworthy guy. He sticks to his principle. And helps other people to have arguments for their standpoints. Next to that I think Ben Shapiro has a good sense of humor while managing to stay on topic. The use of characterizing is in my opinion good banter, but it doesn’t miss the goal of reaching the audience with political explanation.
For me The Ben Shapiro show helped me to understand US politics, and also gave me some handles within political/ethical discussions.
Good: Explanation of Law, Good-Trump Bad-Trump, Honest guy, strong believes rooted within Judaism (Tennach or Old Testament) and Political loyal to himself (no alliance with trump, speaks out both positive and negative, alined with his moral compass)
Bad: If anything, He speaks fast
Greetings,
Hankie B
The Netherlands
© 2022 Chartoo. Verkrijgbaar via iTunes. Product prijzen en de beschikbaarheid zijn nauwkeurig als van 17-1-2022 06:45:06 en zijn onderhevig aan verandering. Elke prijs en beschikbaarheid informatie weergegeven op iTunes op het moment van aankoop van toepassing op de aankoop van dit product. Apple, het Apple logo, Apple Music, iPad, iPhone, iPod, iPod touch, iTunes, iTunes Store, iTunes U, Mac en OS X zijn handelsmerken van Apple Inc., die zijn gedeponeerd in de Verenigde Staten en andere landen. Apple Books, App Store en Mac App Store zijn servicemerken van Apple Inc. IOS is een handelsmerk of geregistreerd handelsmerk van Cisco in de VS en andere landen en wordt onder licentie gebruikt. QR Code is een geregistreerd handelsmerk van Denso Wave Incorporated. Alle andere handelsmerken, logo's en auteursrechten zijn eigendom van hun respectievelijke eigenaars.
BureaubladTabletMobiel
Deze vertaling verbeteren
Het voorbeeld is beschikbaar met dank aan iTunes
Het voorbeeld is beschikbaar met dank aan iTunes